Why Python Developers Are In-Demand? 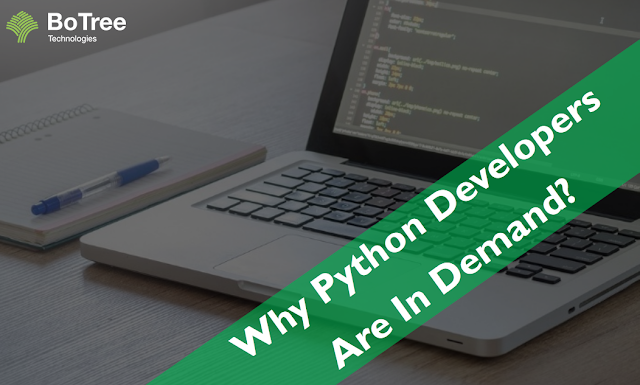 Python is the new black! Yes, you heard it right as popular researches have proved that Python has become the world’s most popular programming language, leaving C and Java behind on the second and third spots respectively. In fact, the demand for Python has increased by 27% when compared to last year. Python is growing by leaps and bounds as the world is steeply shifting towards Artificial Intelligence, Data Science, academic research and more.

The ever increasing usage of Python in Data Sciences, Web development, and academic research has a direct correlation with the increasing demand of Python developers. As the avenues increase, so do services and thus the demand for service providers. Experts suggest that Python developers don’t just work on the best technology but are also some of the highest-paid software developers in the world.

As per the reports of popular job portal Indeed, the average salary of Python Web Developer equates to somewhere around $116,006 per year. The eye-popping amount clearly suggests the prominence of Python language in the software arena. Let us have a look at the major reasons for popularity of Python application programmers.

Some of the Major Reasons for the Growing The demand of Python Developers Are:


Efficiency at its best: As Python is a language with short and crisp code, it becomes easy to write complex code in it. What Java can accomplish in 60 lines of code, Python web programming can finish in just 20 lines. This shortcode nature of Python makes it far more efficient to understand, execute and learn. Programmers are far more efficient than those working on other technologies.


Rising demand of Data Sciences: This is an age of Data Science where companies and enterprises study huge chunks of data to draw meaningful information. By using this information, they generate future business prospects to expand their customer base and push revenue. Python is considered as the most suitable language of Data Sciences. Therefore, Python developers are making it big when it’s about creating analytic tools and quant models that form the basis of trade strategies.


Ability to switch platforms: The portable nature of Python gives it the freedom of execution on various platforms. As Python application programming experts, developers can easily switch between various Operating Systems and platforms; they rule out the need for hiring separate software developers for each platform. For their all-rounder attitude, Python web developers are preferred over other language experts.


Masters of a versatile language: In general, Python is more flexible compared to other languages. By supporting numerous frameworks and libraries, it gives a versatile touch to coding. One can actually create innovative, never-seen-before Python applications than those in other languages. Developers can actually experiment with the language and bring out an innovative application. This futuristic approach towards development makes Python developers a valid investment.

The above-mentioned reasons clearly suggest that Python is outshining other technologies to become most demanding programming language in future. In return, its developers become the most sought after software developers.


To know more about technologies and how they affect the world, keep checking this space as we will update you about the latest in the world of technology. Moreover, if you want to hire Python developers, then feel free to get in touch with us at CONTACT US.

Posted by BoTree Technologies at 5:04 AM No comments: